The American Historic Racing Motorcycle Association, or AHRMA, has lumped a lot of their racing weekends into back-to-back events.  There are mixed feelings about this as 50% believe it’s impossible to take that much time off from work, and the other 50% like the fact they can get more bang for their travel buck.  For our East Coast-based racing operation, the back-to-backs weekends of Willow Springs and Sonoma Raceway in Southern and Northern California, respectively, made for easy planning and logistics.  So the Sprinter was loaded with a Seeley 750, A Norton Atlas, and a Seeley G50, topped off with diesel, and away we went.

We’d all heard so much about how Willow is a locals track, it’s fast, it’s hot, it’s cold, and it’s windy, then it’s really windy, all of which became perfectly clear very quickly.  We arrived Thursday evening and moved into our garage we shared with San Diegoan Paul Piskor.  Once Ron Halem (aka Goldstar Ron) and his beautiful Goldstar/Manx, on loan to Kenny for the weekend, finally arrived, the paddock was set.  For Friday practice it was very chilly, but we were able to get some laps in and get acclimated to this wacky, windy place.

By the afternoon sessions everything was running smoothly and the lap times were going down for all.  And at the end of of the day there was a bit of wrenching to do – Ron had to work on the gearbox, and Helmut’s clutch needed some tweaking.   Saturday morning we awoke to mid-30-degree temps and snow in the hills above the track.  Yikes.  Dunlop tires are particularly sensitive to the cold and require some tough laps to get heat in them.  More on that soon.  For Saturday’s 500 Premier race Helmut and Kenny lined up with some of the other locals, as well as former AMA Pro and Harley factory rider Walt Fulton on the very trick Aermacchi of Mike Bungay.  Jeff Elings was also there on his home turf on his fast G50.  Ralph Auer on his fast BMW 500.  It was quite a good grid.  Kenny managed to scare up a 2nd behind Elings, with Helmut coming in 4th.  Thorndike took 2nd in the BEARS race.  Later, while leading the Formula 750 race Kenny had the rear end step out on cold Dunlops after getting on the throttle too soon out of T3, almost high-siding, and forcing a sudden unexpected excursion off the track at a very high rate of speed, taking a very scary ride up a dirt hill.  A quick end to his race! 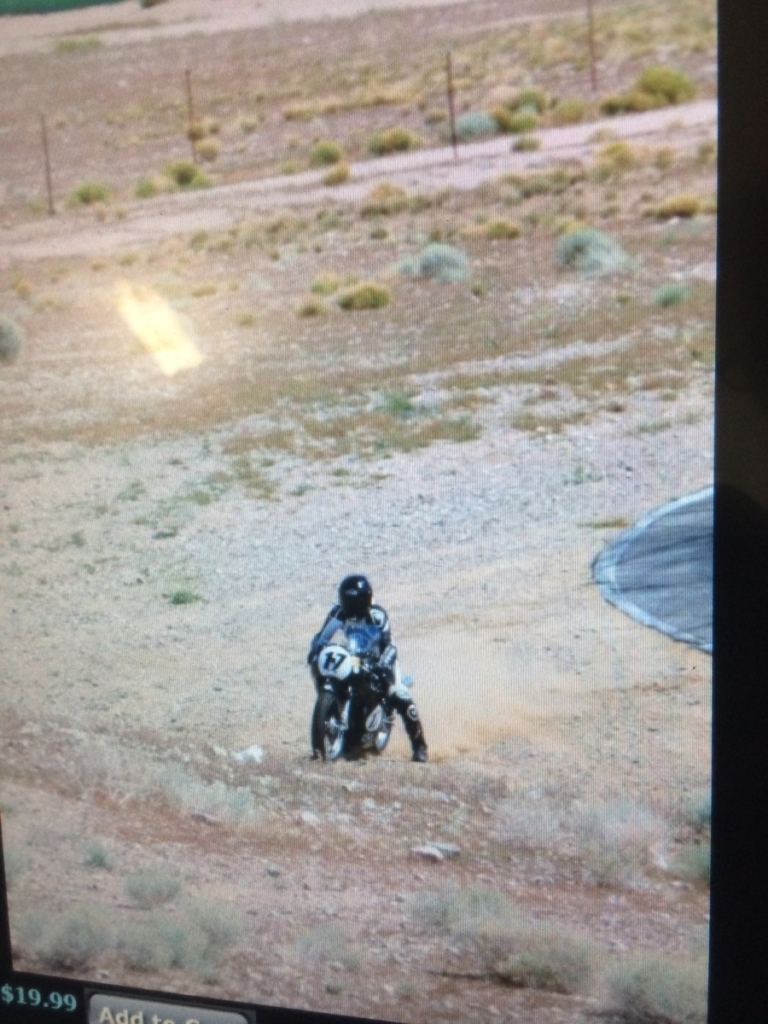 Kenny’s knack-knack up the dunes outside Willow T3

But all was well and good and onto Sunday.  This time Helmut took 2nd behind Elings with Kenny on the Goldstar relegated to a distant 3rd due to loss of clutch actuator.  Jon got the win in BEARS, and Kenny took 3rd in F750 having a great race with Brian Filo for 2nd. 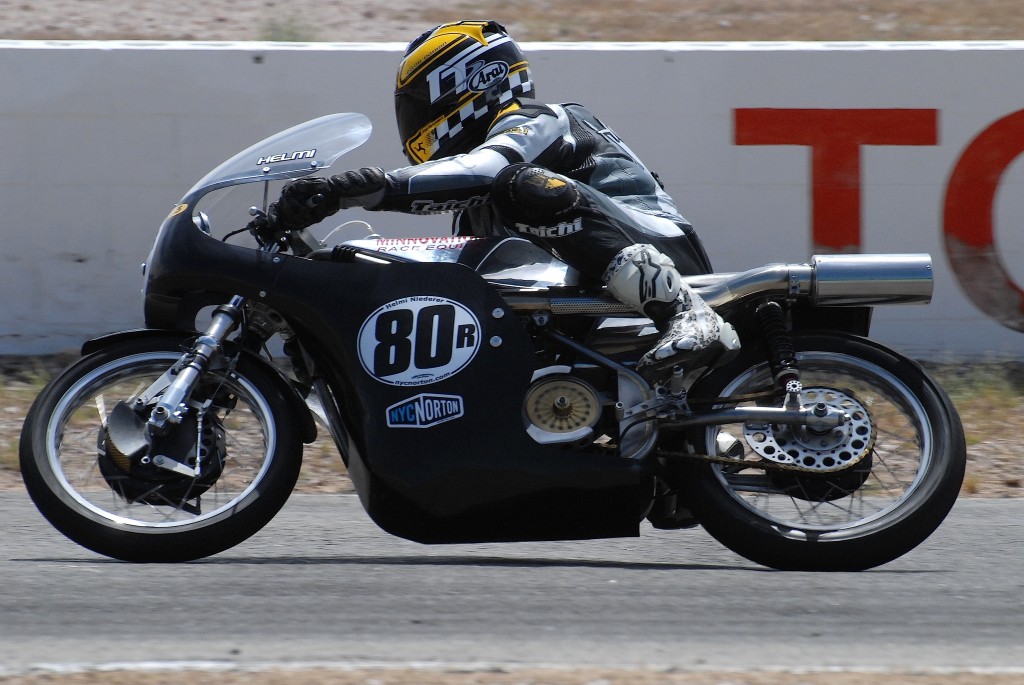 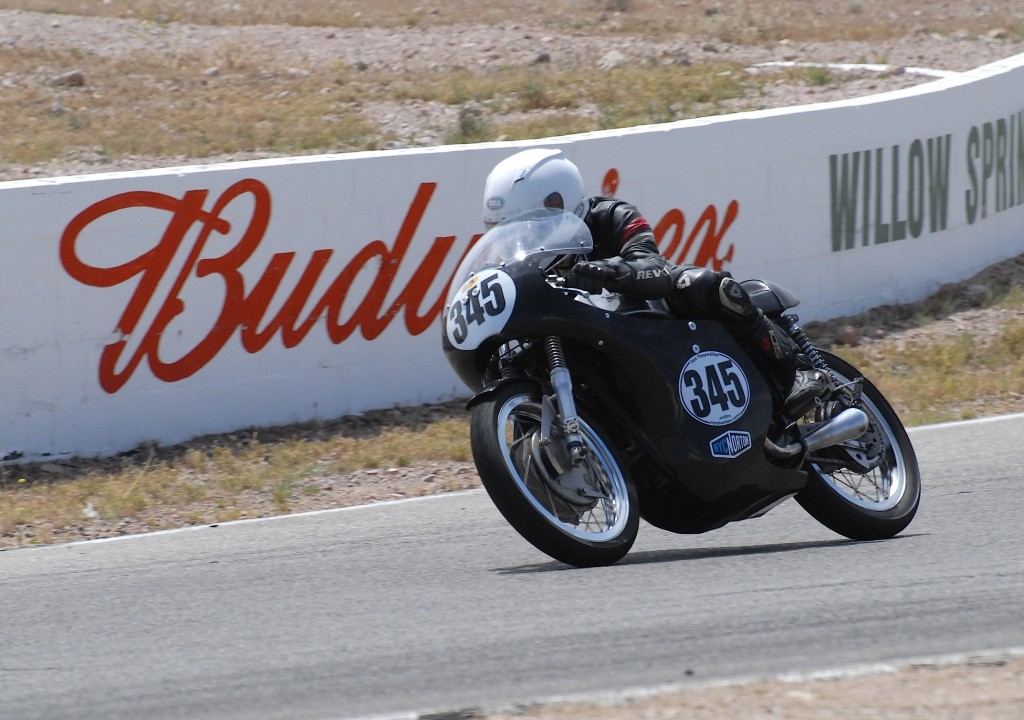 Jon gets the win in the BEARS class on Sunday. Well done 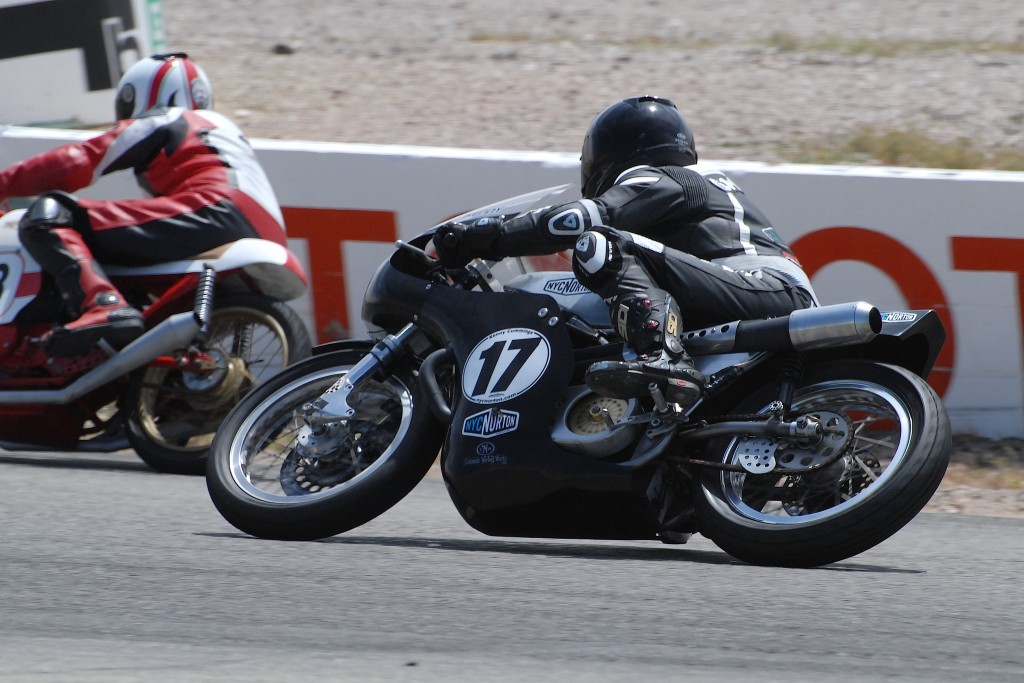 Willow was certainly an experience – the elements played into the racing as much as the track and competition.  It’s an interesting place steeped in American racing culture (Southern California, people), something we don’t get at home back east.  But it was time to change gearing, load it all up, and get on up the road to Northern California for the AHRMA/Sonoma races (aka Infineon, aka Sears Point).

There were 3 days off before the next race meeting, and we managed to spend as much time as possible in every burrito joint between southern and northern California, culminating in a ritualistic feast at Taqueria Can-Cun in San Francisco.  Once in the Bay Area we set up shop at Sonoma Raceway, pitting with Dave Roper and his crew.  Roper would be riding Gary Roper’s (no relation) Velocette MAC, and once again on Mike Bungay’s very trick Aermacchi 350.  As per usual, Rope is a force to be reckoned with here in Sonoma. 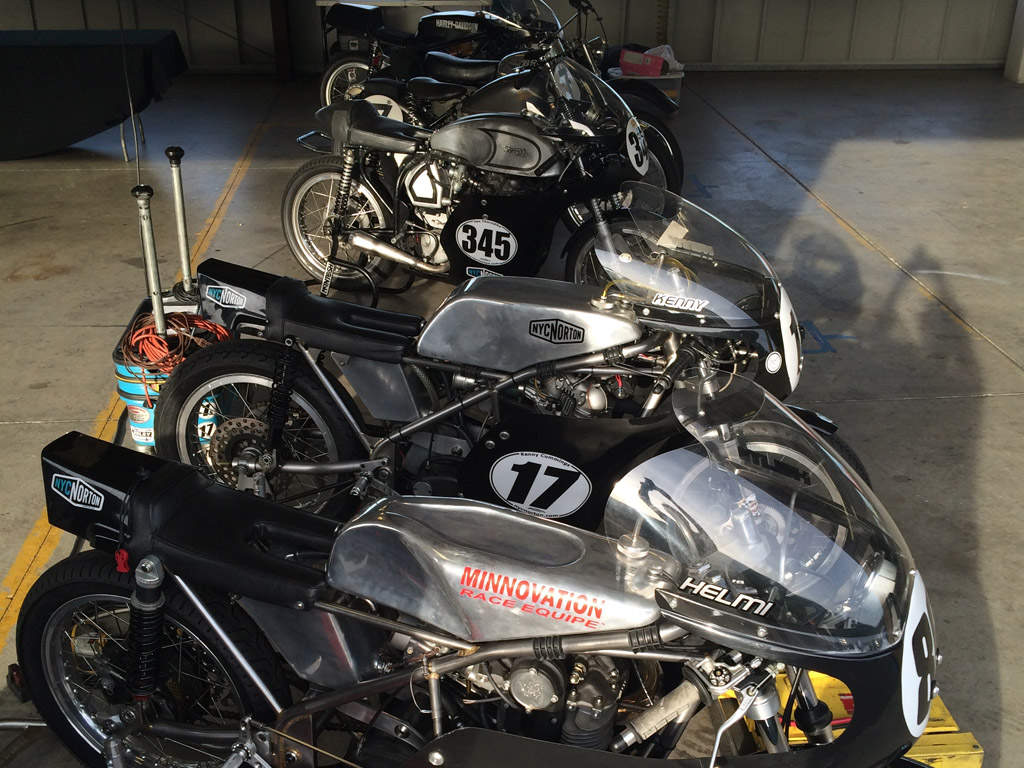 Loading into Sonoma. Notice Roper’s Velocette Mac and Aermacchi in the back… good stuff.

Sonoma is a very challenging track – probably one of the most technical on the AHRMA calendar.  Helmut was prepared for some hard work to get up to speed on his G50.  Kenny would again ride Goldstar Ron’s BSA, as well as his own NYC Norton Seeley Commando 750.  Jon had flown back to NYC after Willow to tend to affairs in the shop (other customers need bikes too!), so his bike was simply there for eye candy.  On Thursday, Roper, Helmut, and Kenny, as well as a host of others, gridded up for 500 Premier.  Roper got the holeshot and ultimate win, but not without a good fight from Kenny.  Helmut was in a very steady 3rd when his brakes began to fade and he had to pull out of the race.  Further inspection revealed the torque arm lug on his Ceriani slider had moved and allowed the brake plate to rotate, which rendered one side of his brake inoperable.  This needed a serious look into with no feasible trackside solution, necessitating an overnight shipment of a new set of forks from the shop in NYC.  In Thursday’s F750 race, Kenny went out for the warm up lap on his Seeley Commando and immediately noticed a clatter within the motor so pulled in with the bike dying on track exit.  Spinning it up on the starter rollers revealed the knocking to be immense, and the bike wouldn’t fire.  Something major was broken inside and there was just too much going on in the paddock to tear into the Commando, so it was sidelined for the weekend.  So it goes.  Friday morning we waited impatiently for UPS to arrive with Helmut’s new forks, and when they did finally show up at 11am, we all worked feverishly to install them onto Helmut’s bike and get him out just in time for the Premier race.  The results were the same for the top 2; Roper getting the win and Kenny in 2nd, with Helmi coming in a respectable 5th.  Helmut’s brakes were very touchy not getting properly adjusted after the quick fork swap. This and having very little track time, he chose to keep it safe and get home in one piece without tucking the front.  Smart. 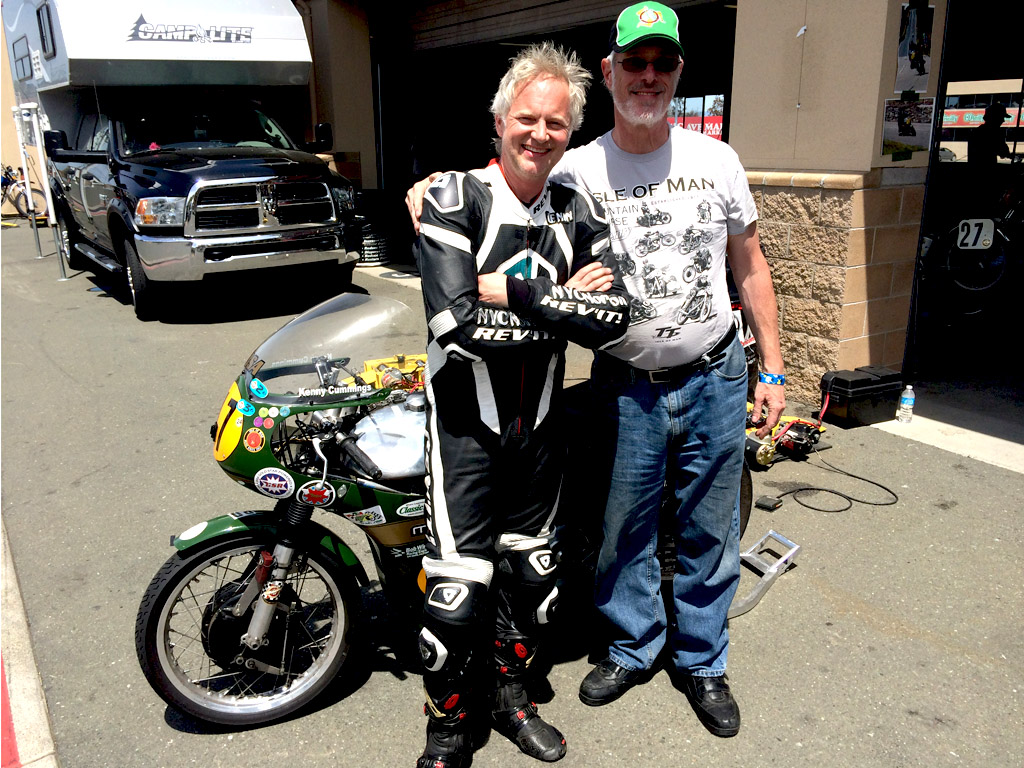 Kenny and Goldstar Ron mug it up at Sonoma

We are all very thankful of Ron’s generosity and spirit.  He has been fighting pancreatic cancer for a couple of years, but he was strong enough to bump start the bike before each outing at Sonoma.  Ron was happy at the track, and often referred to it all as “taking a vacation from cancer”.  The Goldstar came home to him in one piece with some 2nd place trophys, and after racing finished on Friday he bolted a license plate onto his bike and headed off to Petaluma for the 2014 International BSA Rally for the rest of the weekend.  Ron doesn’t get to ride his own bike much, so putting the racer out on Highway 101 would be quite a treat for him.  After the rally weekend his focus would shift to get the bike prepped for its journey to the Isle Of Man for the Manx GP this summer, and we know he’s going to do well at the Island.

We drove back across the US in record time, but took a moment here and there to pay our respects along the way 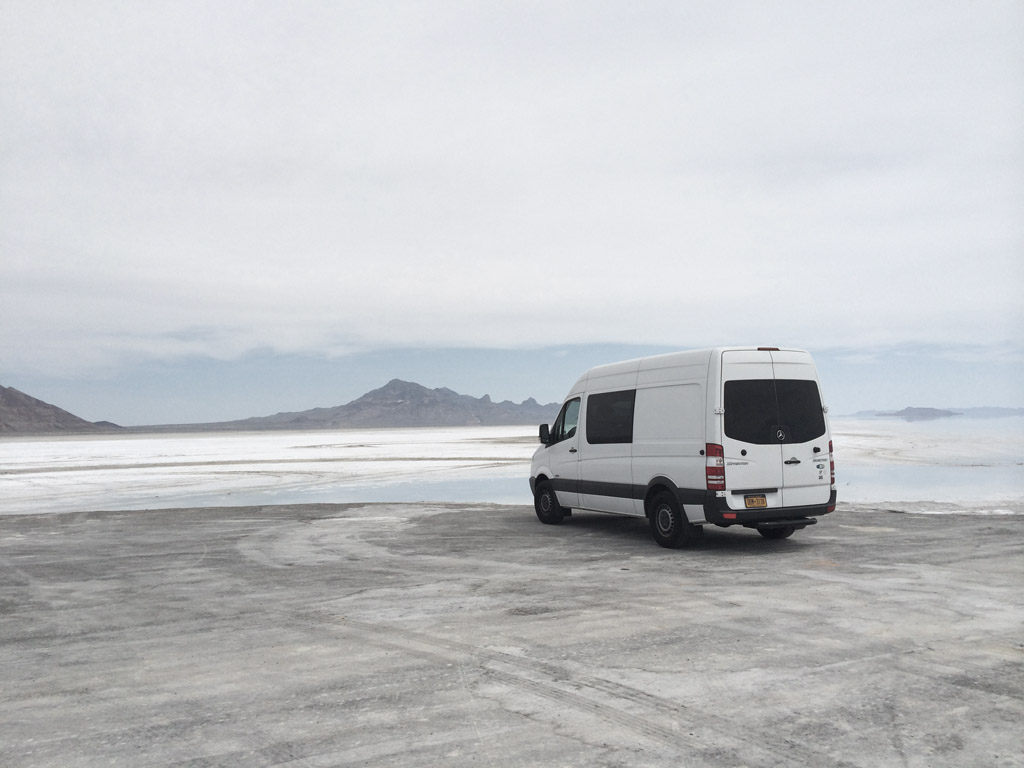 Back to the NYC Norton factory we drove, and onto Road America/Grattan in a month’s time.